LEXINGTON, Ky. – The COVID-19 pandemic has contributed to several economic anomalies, such as toilet paper and lumber shortages, among many others. When automakers experienced a chip shortage that slowed, and in some cases stopped, the production of new vehicles, prices soared for both new and used cars.

What You Need To Know

Once the pandemic stops interrupting computer chip and shipping supplies, prices will likely drop as assembly lines produce more vehicles to meet demand. While used car prices are cooling a little, The Drive reports some used cars are currently selling for more than they cost new off the lot.

“I’ve never seen [the used car market] like this,” said Justin O’Brien, a car salesman for more than 10 years at a large dealership in eastern Kentucky. “Dealerships want to buy people’s cars because they can’t get used cars for their inventory like they used to. Just like anything else, it’s supply-and-demand, and when demand is high and supply is low, the price goes up.”

O’Brien said people are taking advantage of such offers by dealers.

“I know of a particular situation where a woman was way upside down in her car, paying too much monthly and had about five years left on her financing,” he said. “She tried to get out of it several times but couldn’t get a deal that benefited her enough to make the deal worth doing.  When dealerships started offering to buy cars after COVID hit and the chip shortage started, she sold that car for $100 more than the payoff. Similar situations are happening across the country. I have a Kia Telluride I paid $45,000 for and it has about 20,000 miles on it. I could sell it right now for what I owe on it, if not a little more.”

Pulling data from 1.5 million used vehicle sales in January, iSeeCars created a list of the top 15 by observing lightly used late-model cars and reports them selling for an average of 1.3% more than what they sold for new, with the trend predictably favoring models whose demand outstripped supply by the greatest margins.

According to The Drive, in second place is the Chevrolet Corvette, whose demand towered over supply before COVID disrupted its manufacture. The Corvette, along with the G-Wagon, commands a five-figure average markup and represents one of three Chevys and four General Motors products on the list – GM the most-represented carmaker on the list. Behind it is Toyota, whose Sienna and Tacoma represent the only minivan and pickup truck on the list.

The intertwined Hyundai and Kia have three combined entries as well, one of which is the bestselling Telluride, while the others are strangely their subcompact sedans — the Accent and Rio, respectively, are selling for $2,000 more than they were worth on the dealer’s lot. The lone electric vehicle on the list is the Tesla Model 3 at No. 3. 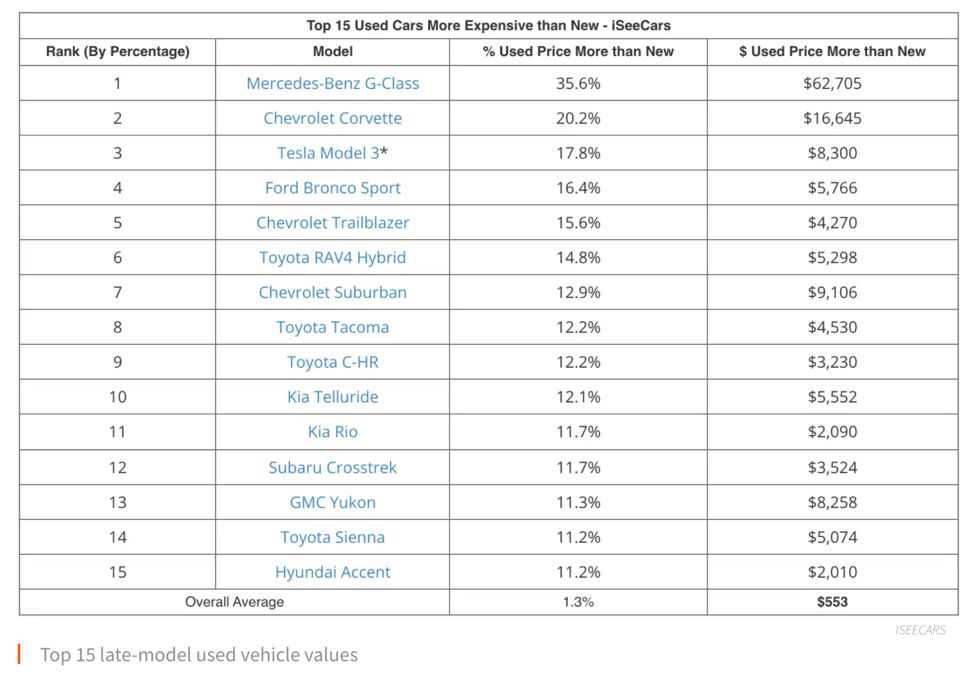 A report by vehicle valuation and automotive research company Kelley Blue Book confirmed inventory limits pushed new car prices higher in 2021, forcing shoppers, with their higher budgets, into the used car market. New vehicle inventory was down 71% at the end of March compared with the same period in 2019, according to KBB.

The first quarter is typically sleepy for car sales, but it was off to an even slower start this year with the ongoing computer chip shortage and record COVID cases from omicron in January. That was followed by the Russian invasion of Ukraine in February, setting off a series of energy and commodity shocks. Then came the Canadian trucker strikes at the border and an earthquake in Japan that further delayed auto production.

“Most used cars dealers buy for their lots come from the rental car company Enterprise,” O’Brien said. “But Enterprise couldn’t replace its fleet with new cars because of the chip shortage, so they had to keep what they had. When the ability to get those cars from Enterprise stopped, dealers had to do whatever they could to have inventory, so they just started offering to buy people’s cars. Most dealerships aren’t placing a big emphasis on buying yours and then selling you one, either, because they need the inventory.”

“The dealer where I work likes to have between 200 and 230 used cars on the lot at any given time,” O’Brien said. “A few months into the pandemic, we had 30. When chip production gets back to normal and new cars aren’t so hard to find, the market will be flooded with new and used cars, so the high prices, which have already started to go down some, will continue going down and eventually get back to normal.”